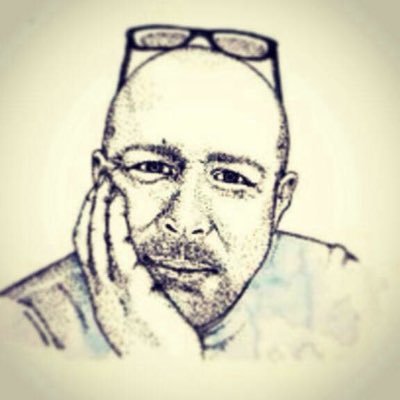 Today’s guest blogger is not really a writer, but he’s definitely creative. He has many self-published photographic books out and has a degree in illustration.

You can check out his work on his website, or just hook up with him on twitter or instagram. Ironically, he has a love/hate relationship with social media as you’ll read below.

I used to be a huge supporter of social media, and still am to some degree but have recently found my interest waning.

Why, you ask? Well, it’s an odd one, and maybe best looked at from the start…

I’m something of an introvert. I like my own company and the company of people I know and like – but I hate social situations, hate the “drinks after work, blah, blah” stuff. I feel awkward and gangly and out of my comfort zone – and at 50, I prefer MY comfort zone to yours.

Yet, push me and I’ll be sociable, god knows we all have to be at times for work, family or friends but I prefer the company of little electronic friends in my phone/tablet/computer until I get too know them. I also have this innate ability to bluff it – on the surface I’m fine and dandy but inside I’m cringing and itching for the right moment to give some excuse and go home to familiar territory and my own little blanket fort.

Was I always this way? Not that I remember – as a student, I loved going out, loved the music, the booze, the friends, the fun. As I age, it’s gotten less so – familiarity breeds content for me.

Now I’m more a silver surfer than scene slut, most of my interaction is online – and I took to it like a duck to water. I’ve had a Facebook profile since we used abacuses but never saw the point of it. So it sat there, gathering dust – until Twitter came into my life.

A friend suggested I try it as I was facing redundancy and looking to try and slowly build an online business – I’d never even heard of it, let alone tried it but I was addicted from day one.

I tweeted with gay abandon, and followed like there was no tomorrow. I looked in awe at people who had thousands of followers and watched jealously as their numbers grew – but the more I interacted and tweeted and shared images of my stuff, the more my followers grew too.

I got a little addicted to watching my numbers grow – you followed me, I followed you…until I got to grips with the whole “bot” thing and realised that not all followers are created equal.

But I grew to love my online friends, as they came and went, not always staying around, not all interacting as well as I’d hoped but it gave me my best understanding of social media and the social aspect of it. I could be outgoing without going out.

And then, through Twitter, I learnt about Instagram, Snapchat, etc and dabbled until I found what worked for me – Instagram and Facebook were the only other two that really stuck but I’ve left accounts littering the internet (I must get around to cleaning them up someday).

When friends slowly left Twitter to migrate to Facebook, I resurrected that profile and joined them, as my Twitter feed filled up with ads and odd tweets that meant nothing, my Facebook feed became more “friendly” so I switched alliances, as did a lot of my online friends.

But lately, I’ve gotten a little jaded, a little tired of someone else being in control of what I can say or do online? And by that I don’t mean friends or followers but the powers that be. It used to be rare that I got censored or warned for whatever I posted but these days…

And this is where there may be issues. It would appear that adding comments that I think the current government in the UK is made up of #cuntwombletwatbats and maybe adding that to every single post I see of the individuals mentioned may not be a good idea. It also doesn’t appear to be a good idea to post images I like to publicise my blog – hairy bearded men without shirts get the crowds and the comments flocking…but not according to certain social media!

I’ve just finished 24 hours in “prison” where you can see your feed, but cannot post, can’t comment and can only “like” – talk about impotence. As a result it’s made my think about how much importance I place on this, on the numbers, on the likes, on people commenting and how it makes me feel.

Don’t get me wrong, I’ve met some wonderful people online, had drinks with a few in the flesh, and class a load of them as real friends. So, maybe as I age, it’s time to shift things from online to face-to-face, make this connections real and build friendships that last? I already have links with some old friends, friends way across the globe that I love and cherish, and alongside them I hope to build new friendships but for me, maybe it’s time to look at the way to shift things so that there is a balance.

I’ve just scanned my Facebook timeline and it involves two friends and the birth of their son (congrats!!!) and Russell Tovey apologising because his nipples made a man faint…this sums me up! And for me it has to be about you, as an individual.

I’m may be jaded and a tad tired, but I won’t be quitting anytime soon, but I may be posting a little less and I may concentrate a little more on the job in hand – making an online career work…watch this space…