I was asked this question for an author interview recently and had to look it up, even though I worked out what it meant without quite knowing how pantser worked into the concept.

For those still uninitiated, a plotter plots their books before they type a single letter, and a pantser flies by the seat of their pants by simply writing and seeing where the story goes.

I tweeted this question to my author followers and found a large number of them pantser. This surprised me until I assessed how my own writing method has developed.

Above is the ‘no longer in print’ first edition of my debut novel. When I began writing it over ten years ago, I pantsered, at least until someone bought me a book on how to write. It’s first paragraph clearly stated that if you are just writing without a plot worked out chapter by chapter, stop immediately. I took this advice, plotted, then found my creative juices stopped flowing.

Eventually I continued writing the first draft, pantsering away until it was ready to be assessed. It was then I learnt the errors of an amateur. I had a novel where the main characters were passive observers while all the action slowly evolved around them. It was back to the drawing board with a plan for the story clearly laid out.

After eight drafts, a small Boston publisher called Charles River Press picked it up, but my editor wanted a lot more work. So it was back to the plotting stage to rearrange, combine and add chapters. Her input was invaluable. The result was so much better than the submitted version. That tale of unrequited gay love in the theatre district of the Afterlife was eventually reborn through Wilde City (pictured above).

The sequel, Drama Queens and Adult Themes, had to be plotted. It is a novel told through four characters in first person. It was a decision that was made as for one, the first in the series was told in first person through one character, and there were too many threads in this book for only one person to know the whole story. 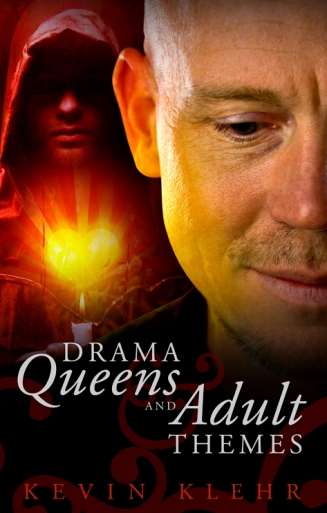 For the last reason alone, plotting the story was essential so the story could keep moving forward, no matter who was telling their part of the tale. Some characters live in Sydney, some live in the Afterlife, and not all of the characters in the Afterlife have met each other. For a reader it would get boring if the novel felt fragmented by the many voices if there was no momentum in the overall tale.

The other thing I find with plotting is that no matter what I have planned for within a chapter, my imagination can run wild with scenery, dialogue, small bits of action, or wherever my thoughts need to take me. As long as the story continues, the rest is up to me. Plus the Drama Queen novels are Magic Realism, so to still be able to daydream knowing your story isn’t going off track is comforting.

I also find that by the time I’m in the last third of a first draft, I fast forward the plot points as I sense they need to be revealed sooner, making me shave off a chapter or two from a novel.

WARNING: Moment of self indulgent boasting coming up!

In one review of my novella, Nate and the New Yorker, Jaycee from Books’n’Cozy Spots Book Reviews said this:

…this is quite possibly *the* best novella-length story I have ever read. Clinically speaking, it is the textbook presentation of the successful short story and all that should entail, but seldom does. Start to finish, beginning-to-fully fleshed middle, to ending-with-a-slight-but-interesting twist, this is the quintessential big story compacted beautifully into a short.

Apologies for boasting, but there’s a point in this. This short story was plotted within an inch of its life. Every chapter and twist was carefully planned before I wrote, again with room to move with dialogue and setting.

Ironically its sequel was not. I finished the first draft of Nate’s Last Tango a few weeks ago, and even though I knew what issue my main characters had to confront, I understood that they had to find their way organically. I needed them to have their own dialogue and not steer what they would say.

All I gave them was the why, the where, and a basic plot that could be rewritten as I went along. I will not pick up that manuscript again for a few months so that I can read it with fresh eyes, but already I want to change one of the chapters so that Nate and Cam can hear advice from a couple of gay elders (or gelders) rather than the young couple who are in this first draft. Plus there’s another turning point I want to add. Somehow my absence of a steady plot has caused doubts in my mind, but until I revisit it, I won’t really know.

The other is a dystopian novel (the main character pictured above) which was plotted lightly as it was initiated from a handful of ideas a few of us came up with over a several glasses of wine. I had half a good plot and sketchy ideas for the second half, including an unhappy ending. But the second half evolved a lot while writing it.

I also found two characters showed up who demanded to be part of the novel. One I allowed, the other would have changed my proposed ending, and if there’s something I’ve learnt about writing is to know your ending from the start. I still have a chapter or two put aside where the character I didn’t need wanted his voice heard, just in case I needed him. I didn’t. He’s been set aside for another project.

But I’m about to rewrite one chapter, add a scene to another, and add dialogue which gives more rational to the plot twists. This will take Social Media Central to its fifth draft, and although I’ve tried to pitch the current draft to potential publishers (its not a genre my own publisher prints), I’m more confident with these new organic changes. Fingers crossed.

So I guess plotting still works for me with room to move within the chapters. But somehow those pantser pieces can be more challenging to an author as they finesse their work draft after draft. And if they work, those pantser novels truly take their writer on a journey.

One Reply to “Plotter or Pantser?”