The author, Jeremy Atherton Lin, is ten years younger than me.

Which made reading Gay Bar, Why We Went Out all the more interesting hearing from the perspective of someone who started his gay bar adventures when I was embracing a scene he was still navigating. Plus, his tales take place in LA, San Francisco and London. My escapades began on the Gold Coast in Queensland and continued in Sydney.

So while there were similarities in experience, there were noticeable differences such as the dangerous mix of cultures in London during the 2000s leading to some horrific gay bashings. It was shocking to read that so recently this level of homophobia was happening at a time when in Sydney this wasn’t an issue. 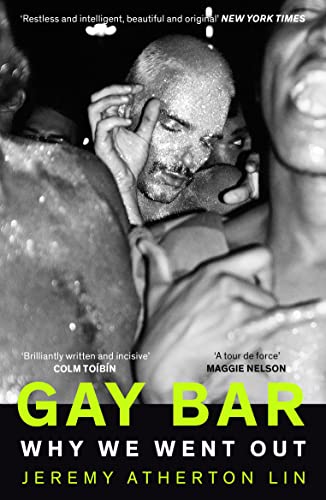 This fascinating book is part autobiography, part history lesson, part reflection. As the author eloquently points out in the final chapter, we weren’t looking for a “safe space” as many in the rainbow community seek today. We were looking for risks. We wanted to be surrounded by like-minded guys and in doing so, felt comfort.

Or as he points out in an earlier chapter about finding the only gay bar in town:

“It’s not about holding out for a good night, but rather a letting go — accepting the gay bar’s unconvincing promise of escape.”

We are thrown into a back room as Atherton Lin speaks frankly about what he and Famous (a mysterious figure who becomes well known to us halfway through the book) did to get up to mischief. As we continue, his own experiences are often the most satisfying. They add context to this well researched work, helping those who’ve never lived this life understand a time when being in proximity to those like you, made all the difference.

Early on he characterises bitchy queens using clever observations like:

“I heard it said that gays are perpetually adolescent, but I was convinced this particular sampling had never been boys in the first place.”

“They assessed instead of greeted…They were satisfied with cliché.”

Atherton Lin’s prose is both clever and charming throughout.

He not only sums up the particular vibe of a club or pub, helping you live the experience with him, he also captures what it was like to reside in a particular city at a certain time. We have context for the individuals, or queer sub group, he is describing. And while there are several review quotes on the cover, it’s the one from the New York Times which encapsulates my experience of reading Gay Bar.

“Restless and intelligent…beautiful and original.”

Toward the end, he summarises what’s become of the scene.

While we live with acceptance, Atherton Lin speaks of straights who claim to understand us while claiming “I’m basically a gay man”. They never knew what it felt like to be “less than”, or to hope there was someone camper in the room so they wouldn’t be singled out.

Ultimately, this author speaks for us gay men who were born in the second half of the last century. Many of us “earned our rainbow stripes by putting up with the hard rain”. Gay Bar examines what we did to find ourselves in a world which judged us harshly, while looking back and reminding us what those before us did were the stakes to be oneself was much higher.