Stanley is almost fifty. He hates his job, has an overbearing mother, and is in a failed relationship.

Then he meets Asher, the man of his dreams, literally in his dreams.

Asher is young, captivating, and confident about his future – everything Stanley is not. So, Asher gives Stan a gift. The chance to be an extra five years younger each time they meet.

Some of their adventures are whimsical. A few are challenging. Others are totally surreal. All are designed to bring Stan closer to the moment his joyful childhood turned to tears.

But when they fall in love, Stan knows he can’t live in Asher’s dreamworld. Yet Stan is haunted by Asher’s invitation to “Slip into eternal sleep.” 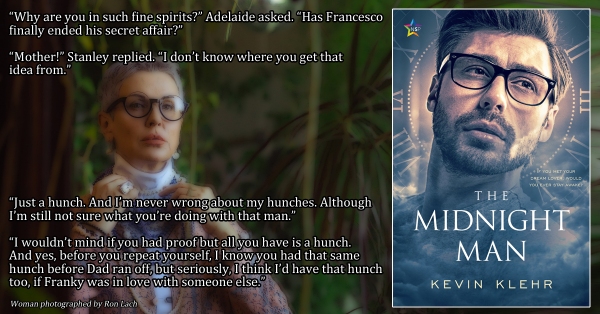 Thanks to Camille at Joyfully Jay for her 4.25 star review.

“The Midnight Man is a uniquely layered approach to storytelling.”

Thanks to Suzanne Irving for her five star review on Goodreads.

“It definitely entertained me, but I will be thinking about it for a long time to come.”

Thank you Star Dragon Wolf for your five star review on Book Bub.

“The whole concept of a plane of existence in the dream world is intriguing.”

Thanks to B.E. for their 5 Star review on Goodreads.

“Totally recommend this book for people of any age.”

Thanks to Harrison H for his 4 Star review on Amazon

“…I think this is a good way to think about books, how they leave impressions on the reader and ripple in their thoughts. And this book has done that for me.”

Thanks to Phoebe for her review on Goodreads

“This is a story that stayed in my mind for a while and made me want to sift through its messages.” 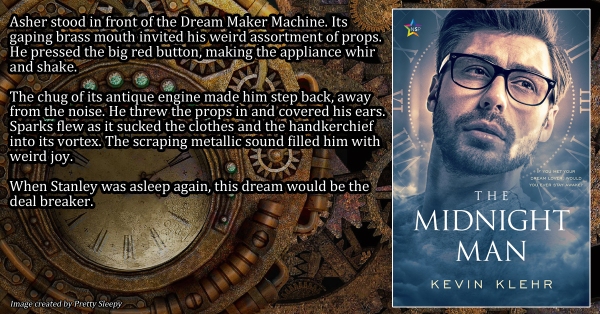 The alarm clock ticked loudly at the side of their bed, and while Francesco snored like a buzz saw clearing a rain forest, Stanley lay awake. It wasn’t his partner who was the cause of his insomnia for Stanley could doze through the wildest storm. In fact, Stanley was sound asleep only ten minutes prior until he thought he heard someone whisper in his ear.

The arms of his alarm clock inched their way toward the number twelve. He sat up and, shortly after, stood and took his dressing gown from the bed post. He remembered hearing the word “eternal” in the sentence that was murmured to him, but the rest of the phrase was hazy.

Numerous cats meowed in unison. Stanley was unnerved. He strode to the living room and peeked through the curtain. Several feline gangs gathered on the front lawn. An eerie wind shook the trees as the cats strolled to the centre of the garden.

Stanley studied the sky. Not a star in sight. Nor was there a cloud above, so the lack of any sign of the universe made no sense. He pondered the end of humanity before concerning himself with his morbid train of thought. The voice whispered again, and Stanley instantly felt drowsy. He sauntered back to the bedroom and fell on top of the sheets.

In his slumber, his dreams began, and in this personal movie he sat at a small round table in a circular room. A crimson curtain wrapped itself around the space.

A crisp white tablecloth fell just above his knees and embossed on a shiny gold card in the middle of his table were the words RESERVED. THE MIDNIGHT MAN.

There were other tables too. All with the same small card and all with either a mature-aged man or woman sitting at them. The only difference was, each of these people were dining and chatting with a younger male companion.

He noted the dress code. Every man, young or old, sported a dinner suit. Stanley also wore one. Each lady was adorned in a stylish black dress.

“Excuse me, sir.” Stanley looked up. A tall waiter with a quaint moustache addressed him. “I’m sorry to say your Midnight Man is running late.”

With time to spare, Stanley picked up the card. He gazed at it, giving the appearance it aroused his curiosity, but he was actually eavesdropping. He eased back in his chair to listen to the woman who was sitting behind him.

“Interesting conversation?” This questioning voice startled Stanley, but boy, was it sexy. Its honey-rich timbre could invite you to a murder and you’d stay under its spell until the moment the knife was placed in your hand. Stanley looked up to see whose voice it was.

A young man stood with hands in his trouser pockets. His smile sent Stan’s thoughts spinning. Stan knew a genuine grin and this lad had no hidden agendas lurking behind his cordial manner. Stanley was convinced of it.

He measured up to all the best-looking groomsmen Stanley had admired at the various weddings he’d attended. Most of the time it was the best man Stan fancied, especially if they were still playing the field. He’d stare at them wishing to be swept off his feet and carried down the aisle.

This Midnight Man had a crew cut. It’s a cliché to say it was the preferred style of boy next door types, but for Stan, it sealed the deal. Something classic. Something captivating. Something familiar enough to help him not feel old.

“I’m Asher.” He held out his hand. Stanley took it, holding onto it until Asher seated himself at the table.

“You’re beautiful,” Stanley heard himself saying. “Sorry, I don’t mean to be forward. It’s just that…” He covered his mouth momentarily. “How old are you?”

“What for? For you?” Asher smirked with bedroom confidence.

Asher reached across the table and tenderly stroked Stanley’s wrists.

“Are you hungry?” Asher asked. “Should I ask the waiter for the menu? I’m looking forward to sitting here and listening to your tales.”

“Strangely, I don’t have an appetite.”

“Me neither.” They were the only people in the room now. “Maybe your dream needs a change of pace.” Asher stood. “Follow me to enchantment, or something close to it.”

Stanley did as he was told. Through the crimson curtain was an opening. As they ventured through the darkness on the other side, music broke through the silence. The floor shook with each beat. The murmur of a crowd brought back many memories for Stanley, and as the laser lights flashed random colour into the void, the crowd became visible. Everyone was Asher’s age. Everyone was male. Stanley reached for Asher’s hand to lead him through this curious scene. They were both dressed differently.

Stanley wore a waistcoat adorned with tiny roses, buttoned tight to expose his chest. Asher wore a blue T-shirt as he strode toward the DJ. Stan looked down at a smiling quarter moon, the oversized design on his belt buckle. He stomped his foot. His shoes were sturdy, leather and unmistakably British.

It’s perfect in every way, he thought. So perfect in fact, he was waiting for the ecstasy to kick in. He worked his way back to Asher.

“Why are you called the Midnight Man?” he yelled over the house tune.

“We’re all Midnight Men,” Asher called back. “Everyone dining with your generation in that restaurant was a Midnight Man.”

“But what does it mean?”

“It’s the time I entered your life—midnight.” His playful grin returned.

Then Stanley felt a change.

First, the music. It sounded hollow, as if someone had played around with an equaliser and got it all wrong. Then, like a jet engine, it soared.

Next, awareness of his own lanky shape was replaced by a oneness with everyone in that huge hall. There were no creaky joints or sagging skin. Decades disappeared. A sense of love so overwhelming consumed him. And in this micro moment, Asher was arguably the most bewitching guy Stanley had ever met in the decades he walked the earth.

Then it hit full charge. The need to dance! The want to take off his waistcoat and sense the sweat, the pleasure, and the energy that took control. He was lost in sensation. He was lost in thoughts that highlighted every positive thing about himself. He hadn’t felt this for a very long time.

And Asher was part of this charge, the best part. A boy at the start of the finest years of his life. Young enough to be sought after and brave enough to seek love from those who’ll fall under his spell.

The guys nearby were eyeing Stanley. A lover Stanley recalled for his kindness at a time when he was finding himself. This guy waved at Stanley. The gesture was returned with an air kiss.

Coming toward them was a guy who sported small mirror tiles on his shoulders, as if he was a walking disco ball. He had similarly mirrored shorts. And he also held a mirror.

To Stanley, this guy wore the face of a human hiding his hurt. Someone wishing others would understand his sadness, yet too polite to talk about his feelings, or cry until there were no more tears. A feeling too familiar.

Stanley raised his arms and shook his butt, encouraging Mirror Man to find his bliss. For a moment, the guy laughed. A door was open, ready for pain to be released. He swung his hips, making his way toward Stanley, so Stanley raised his arms higher to transmit love in all directions. Then the guy held his mirror to Stanley’s face.

There it was. There was no denying it. Stanley was not twenty-one again. He was nearly fifty. A man in need of maturity.

Mirror Man was nowhere to be seen.

Stanley sat startled as he found himself opposite Asher back at the restaurant. Both were wearing suits again. 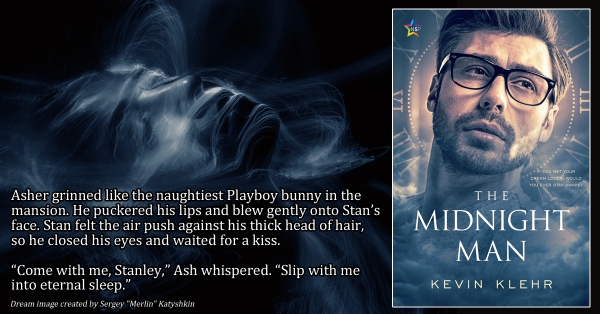