Tomorrow I’m going to feel a sense of déjà vu as my first novel gets relaunched for the third time. My last publisher closed down, so I was very lucky that NineStar Press decided to re-contract my works. 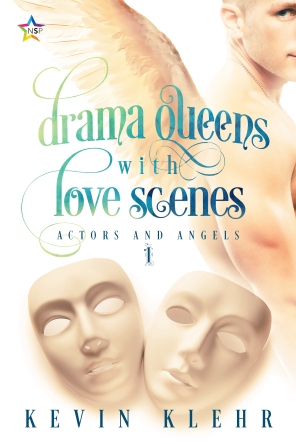 Drama Queens with Love Scenes started as a handwritten manuscript titled Staging Life, and although I can’t remember how long ago I jotted down the first words into my journal, I can confidently say that it was over ten years ago. The original concept for the book had a cast of dead thespians acting in plays that taught them something about themselves, awakening them to lessons they missed while alive. As I wrote, the plot drastically changed.

In the first draft, friends, Allan and Warwick, visit Allan’s Uncle Bryant in Melbourne. The opening chapter was a slight ode to 19th century sci-fi as a large shiny rocket in the front garden takes the friends by surprise. The uncle and his poet girlfriend, Pamela, decide that Allan and Warwick should take the maiden voyage which they agree to, never believing for once this thing would fly. Something goes wrong and they find themselves in the Afterlife in the second chapter.

When I had this draft assessed, I was slapped on the knuckles for confusing the fantasy world with the real. I was told a rocket malfunction shouldn’t appear as a cause of death because it was fanciful and interfered with the world building of the Afterlife. I was also encouraged not to begin the book at the start, and to make Allan and Warwick’s death a mystery that unfolded in flashback . I took her advice and worked with her for several more drafts.

When the novel was first contracted I was given an amazing editor. Her name was Mary Belk. Sadly she’s passed on since we worked together, but she is to this day the person who has influenced me the most in the way I write. She made me revisit my entire manuscript by combining chapters, dropping a character, and getting me to work harder in my ‘showing, not telling’. I worked for three months revamping the novel and had my doubts about her suggestions quite regularly, but as I sat reading the final draft from start to end, I realised she was right in everything she said. I wrote about Mary in another blog which you can read here.

The next stop for my novel was Wilde City, a wonderful gay press who closed down recently. Through this publisher I got the much needed exposure to the right audience. More glbtqi blog sites picked it up for review. And as in the scant critiques that came out previously, my angel character, Guy, was still the most popular character. He has been described as many things including the emotional linchpin of the story. One reviewer claimed that they had even put in their own request to have Guy as their guardian angel. His popularity in this book has always surprised me. I even wrote a blog about it which lives here.

Since Drama Queens with Love Scenes I have written several other novels. The sequel, Drama Queens and Adult Themes, will be relaunched next month, as will my ‘not quite a romance’ novella, Nate and the New Yorker. But what’s equally as exciting as seeing these new editions find new readers, are the first releases of two more works. One of these is Drama Queens and Devilish Schemes, the third in the Actors and Angels series. And yes, there’s a horned character who I’ve named Preston in the book.

But for the time being I’m looking forward to my first born being reincarnated – fitting for a novel about actors in the theatre district of the Afterlife.

A blog which goes deeper into the story of writing this particular novel can be found here.