A father and daughter team were on the radio the other morning.

Like me, dad obviously enjoyed the house party days of the nineties. He told his daughter (and us) about the Primal Scream track, ‘Loaded’. Hearing people still affectionate about that decade is why one of my WiP’s is set in that era.

I’m still working on the first draft of that manuscript, but circumstances meant I haven’t worked on it solidly on a day to day basis. And even though I have a chapter by chapter blueprint for it, I’ve lost touch with this particular story.

My other fear is I’m not doing that decade justice.

I have many extra notes of general things we did in the nineties. Such as buying unstained pine furniture (a CD rack for example) and lacquering it ourselves. Once I finish the first draft, I can review the piece properly and bring it up to the level of nostalgia I want.

But for now, that WiP is being put aside. A story I’ve been working on for years is the one I’ve decided to get ready for submission.

The Midnight Man has been an obsession of mine for some time.

It’s one I need to get perfect, and during the years I’ve worked on it, it’s influenced other short stories and a novella which will be published soon.

There’s a party scene which I believed was polished. Reading it fresh I find that two lines of dialogue are spoken to Stanley, the unhappy main character, before he briefly leaves to explore the guests in the living room, then returns to the people who spoke to him initially. Huh?

In another scene there is dialogue that is just exposition. What was I thinking? 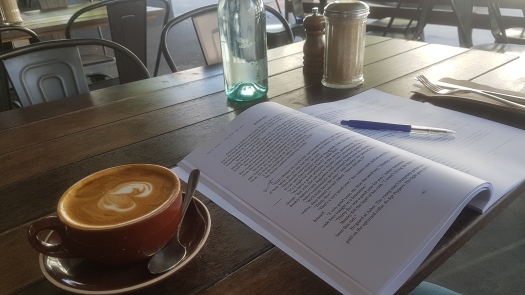 Overall though, the piece is good.

I’m reading the sixth draft which includes extra chapters that have expanded the story and I’m relieved they work without hindering the momentum of the earlier versions. Usually when I do this I have to work hard at making sure a story doesn’t feel bloated.

So, my first goal for 2020 is to get it published. It’s initial draft was written back in February 2017. It’s been waiting long enough in the shadows. It needs to be shared!