I started this journey well over a decade ago.

My first novel was redrafted eight times and after many rejection letters, was first published in 2012. For various reasons it is now with its third publisher.

In the early days I tried all the tricks authors are told by bloggers on how to succeed. Start a newsletter. Create a book trailer. Be interviewed on podcasts. Do reciprocal book reviews.

I tried so many and to this day I’m still not a huge selling author, but coming up to ten years, some things have changed.

My social presence is noticeable. My book sales are slightly better.

People are reaching out to me now. Not every day. Not necessarily weekly. But at this stage of my writer’s journey, more are saying hello than ever before.

Some are good. Ben Shepard asked me to contribute to a new book recommendation site he is working on. I wrote an article for it which you can READ HERE. It’s an honour that for some reason he singled me out.

But you also have to watch out for the dodgy people who email you.

I’ve been contacted several times for money in exchange for a review. One asked particularly for a pdf of a novel. She didn’t care which novel.

Many pdf books end up on illegal download sites.

She has a Goodreads account with many novels listed as read, but hardly any have been given a star rating. And she only wrote one book review containing several sentences. But her Tik Tok account was where she wanted to start posting video book reviews. She currently has three Tik Tok videos, none of them reviews.

One has 5 million views. Another has about 14 thousand. Neither are interesting. It’s impossible to see how they went viral. But then I found out you can buy Tik Tok views.

Then there are the readers who reach out to you.

Every time I post my newsletter, a lovely elder in Queensland always writes back. She starts her correspondence with ‘Hey boyfriend’ each time. It’s nice to have a fan who is also a pen pal.

MM author Frances Regan tweeted a lovely recommendation of my recent book. Now, all us authors have a handful of regular reviewers we reach out to when we release something new, but I’ve never met Frances. This tweet was a pleasant surprise. 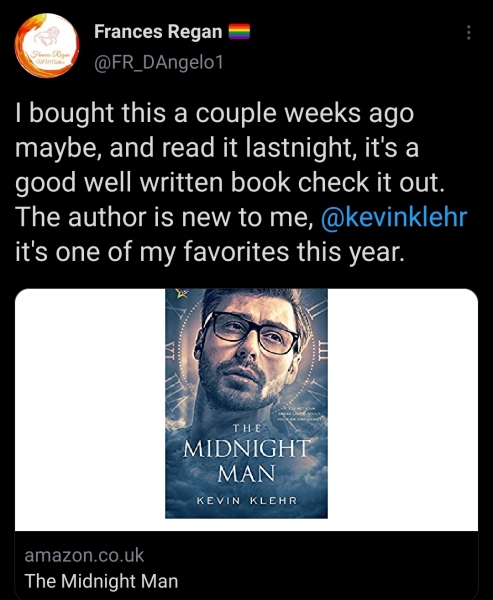 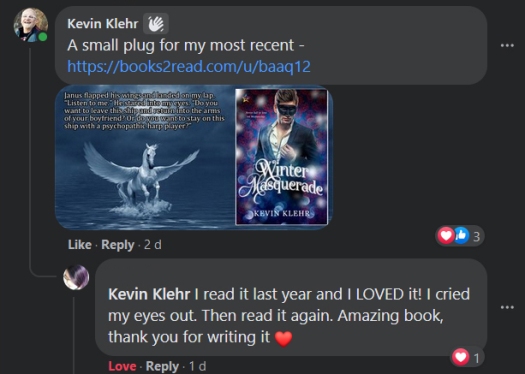 I’ve been blogging about my research for a book set in the 90s around Sydney’s infamous gay strip, Oxford Street. Someone reached out and wanted to know where I’m at with that particular work in progress.

Another reader just finished my first novel and had to email me.

What has also surprised me is that this first novel and its sequels are now selling better than ever before. The third in the series, Drama Queens and Devilish Schemes, hardly ever sold. Now people are reading the series.

So, work hard and be patient.

Unless you land on your feet with a best seller, you will be playing author for the long haul. And while your book isn’t on the top ten list, you eventually realise people are reading your work.

And this makes your writer’s journey, however long, worth it!

One Reply to “Playing author for the long haul”